Disclaimer: I’m not in a huge writing mood at the moment, my brain is really on its own journey right now. But I wanted to document my weekend a little bit! And I’ll add pictures later.

One of my best friends and roommates from back home came to Copenhagen over the weekend. She (Erin) is currently studying abroad in Amsterdam, so she flew over to visit. All I can say is that it was a very much needed interaction to get through a sort of rough end of the week, and I’m actually weirdly grateful for the timing and her coming at all.

My roommate was so chill about Erin coming. I asked her ahead of time and she was unfazed by someone coming- the only concern was where she would stay in the apartment, since our couch is a bit small. Solution: I buy a comforter at Jysk, I buy a blanket at H&M, I sleep on the floor in my room, Erin takes the bed. Eaaaasy.

I tend to wake up at a crisp 9-10am now because I go to classes so early. Erin, on the other hand, has maintained her enviable ability to sleep until noon, and so our outings were mostly in the afternoons and evenings. Honestly, I was pretty glad for just our dining table catch-ups, even if they did cut into outing time. As much fun as I’m having here with all the Newness, it’s so nice to be around someone you’re extremely comfortable with already. On top of that our friend Stephanie is also at DIS, and it was extra nice to hang out together.

I guess in addition to these, I’ll note that Erin had a minor religious experience at a Lagkagehuset on her way to the airport on Monday, which shocked me because I’ve really only had bad Lagkagehuset experiences. 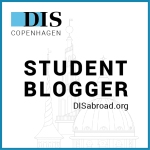